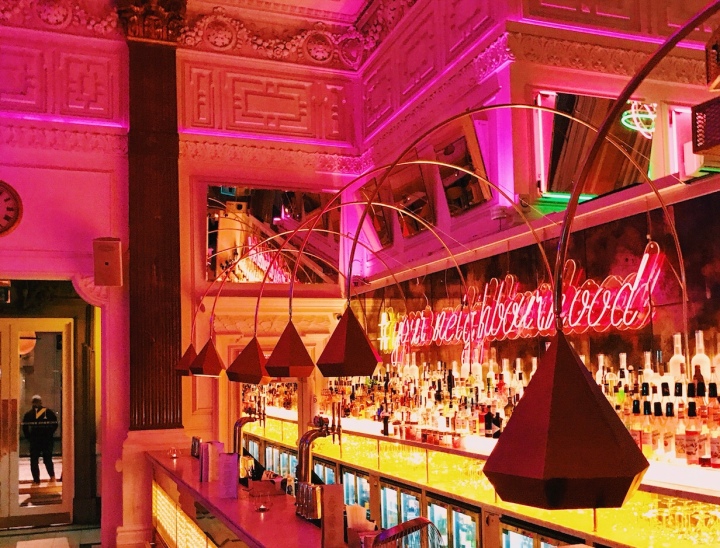 Neighbourhood Liverpool, the home of fancy cocktails, pink neon lights and reaaally good toilet lighting. Or so we thought. NBHD invited me down for their Roll into Monday’s (SUSHI!) offer this month, and also their Hard Knock Wednesdays at the end of the last year. It’s always been renowned for it’s great atmosphere on the weekend, but there’s so much more to Neighbourhood than the glamorous night-outs and instagramable interior. Why, you ask? Well, they do some pretty incredible food too, and the offers throughout the week are genuinely money-savers if you’re wanting to eat out when your heart is telling you yes, but your bank balance is telling you no, no, no. 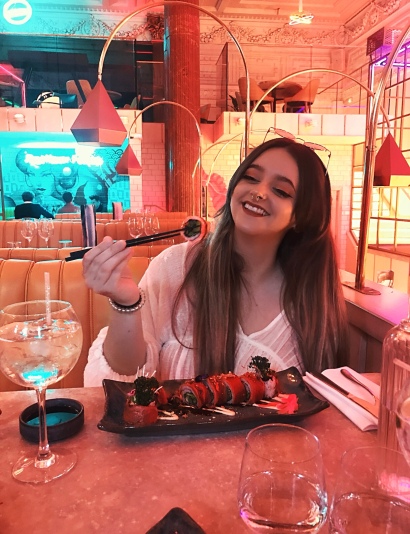 FORGET BLUE MONDAYS! Roll into Mondays at Neighbourhood are the new best thing. It’s 50% off any sushi rolls all day which makes them £5, and you literally get a huge PLATTER of sushi for that. I ordered the Seared Teriyaki Beef with mushrooms, tender stem broccoli and shallots (pictured below) and got 7 pieces. That’s 71p per sushi roll!!! I have to admit, I’m not normally a fan of sushi and I’m super picky when it comes to food, but NBHD sushi is super yum, the rice is squishy af (the best kind) and the presentation was amazing! Who knew sushi could look that pretty? You can also get Spicy Tuna, Crispy Duck, Flamed Salmon and Tiger Prawn, as well as vegan and veggie sushi. Although NBHD don’t have vegan meals on their menu, they’ve been able to cater for my vegan friends numerous times with no fuss at all, which is amazing! 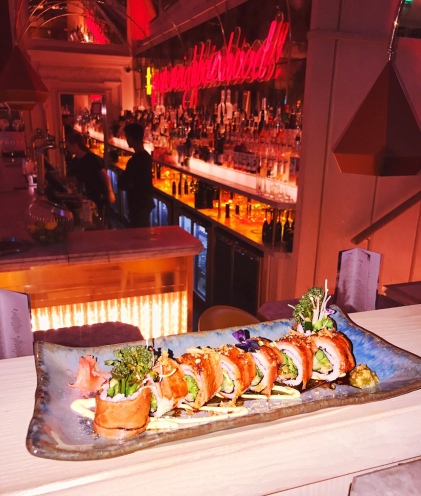 We also ordered truffle fries and sweet potatoes fries on the side, because we’re only human and we couldn’t help ourselves. After filling ourselves up on sushi, we moved onto the next best thing. 2-4-1 drinks until 8pm! As so many of you probably know, NBHD can be a bank breaker of a weekend, but in the week? There’s so many cheap drink offers! It turns out that sushi and cocktails go pretty well together too. 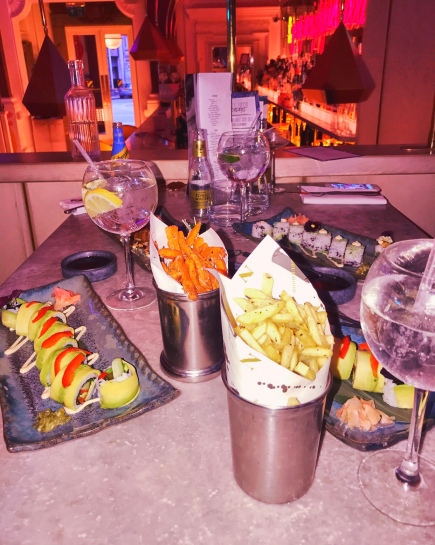 Is there any way to get over hump day than to eat and drink your way into Thursday? I didn’t think so. On Wednesdays at NBHD, you can get a starter, main aaaand dessert for £18. That’s a whole food coma for less than £20. 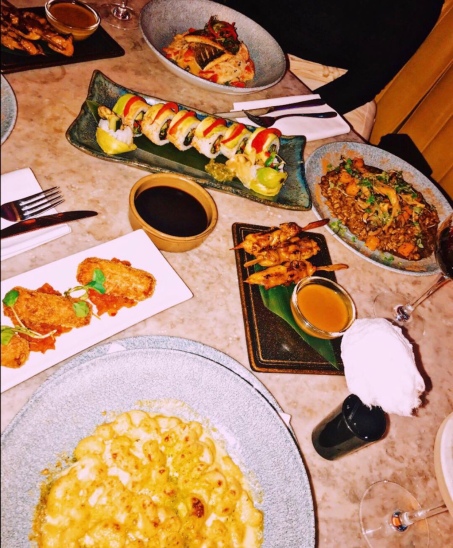 The menu has loooads of choice, so whatever you’re feeling, there’ll be something to cure your cravings. I went for the Chorizo croquettes for a starter, and Mac n cheese for my main (cheese and carbs – the perfect combo). We also ordered chicken lollipops, Thai sea-bass curry, blackened salmon fillet, winter risotto (they made it Vegan with no issue again, yay!) and loads of fries. Oh and more sushi. 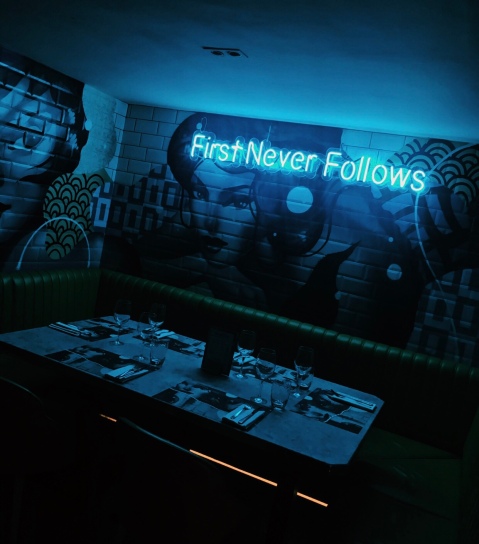 I guess I didn’t have any expectations for what the food was going to be like, as NBHD is already such a nice place and it wouldn’t really effect my opinion on it, but the food was incredible! It was super flavoursome and went down so well with a couple of cocktails (any excuse). It doesn’t stop there though! DESSERT. There were a few really tempting desserts on the menu, such as the Chocolate, Marshmallow and Ice Cream Pizzetta and Peanut Butter, Caramel and Chocolate Waffles, but we opted for some good old ice cream. I’d never usually pass up other desserts over ice cream, BUT THEY HAD MR WHIPPY. If you’ve never tried Mr Whippy because you’ve been living under a rock your entire life, it’s basically just smooth, soft, creamy goodness and you’ll never try anything better. Bonus points: there were mini cookies on top!! 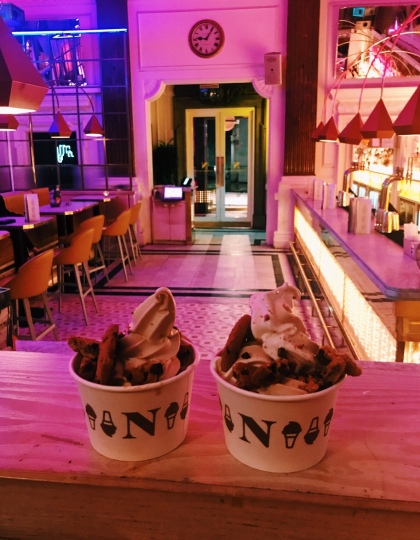 We spent the rest of the night drinking cocktails and taking in the beautiful interior, and our server was just incredible. We couldn’t decide on what cocktails to get on our 17th round (I don’t even think this is much of an exaggeration) and he brought over the barman’s cocktail book so we could pick the prettiest ones. He could smell the basic b*tch from a mile away, but at least we got pink drinks! If you are heading to Neighbourhood any time soon, here’s my cocktail reccomendations: 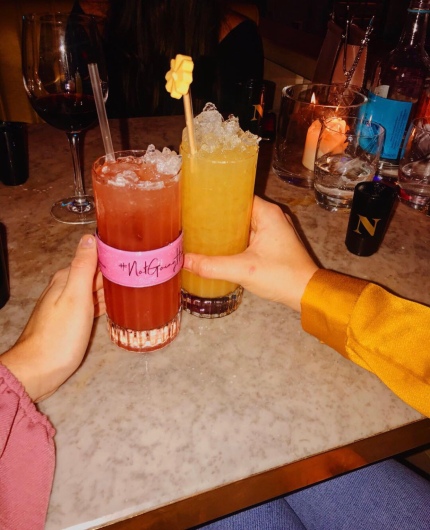 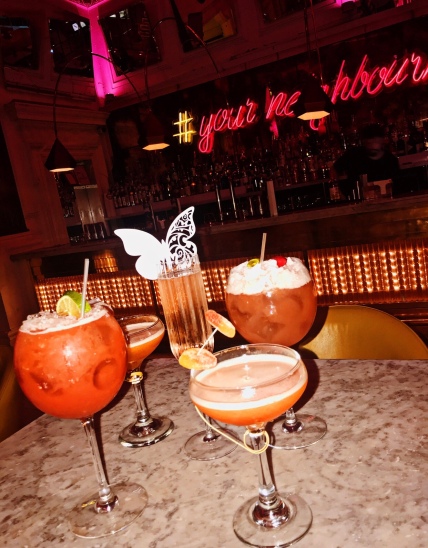 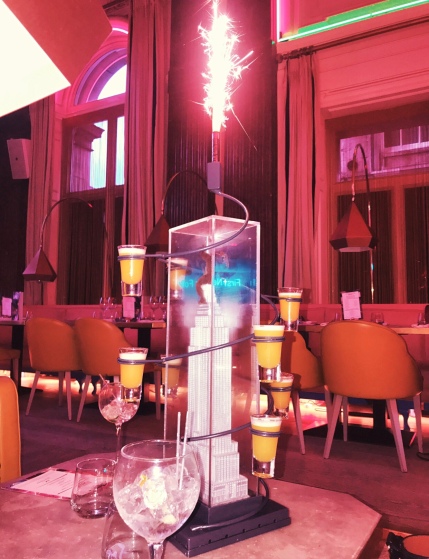 Neighbourhood have numerous other offers that run throughout the week such as Bae Day Tuesdays (2-4-1 meals) and Not Going Home Thursdays (Three small plates & bottomless drinks for £30), but the next one I’m going to have to snap up is the Social Sundays deal. BOTTOMLESS ROAST AND UNLIMITED DRINKS. I think I’d die happy. 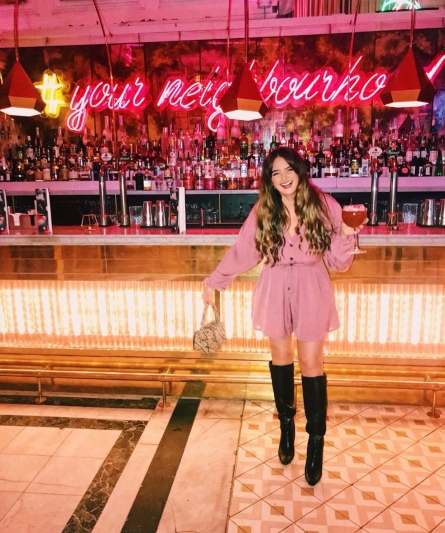 Thanks so much to Neighbourhood for the invite!

*These were complimentary meal in exchange for a blog post. All views are my own.*