This has been a summer for ticking places off of my travel bucket list and one of those places is the lovely Lisbon! I travelled there for a whole week, spending half the week with my two sisters Jess and Charl and the other half with my two friends Frankie and Sally. 2 out of the 5 days were spent at a festival so we really managed to cram A LOT into 5 days and I’m here to tell you my opinions of the top 10 places to eat, relax and draaank.

Alfama, also known as Lisbon’s old town, is such a beautiful place to just wander around and take in the scenery. As I’m sure many of you already know, the architecture in Lisbon is amazing with almost every building being covered in tiles (which I am obsessed with) and Alfama was a perfect example of the beauty of Lisbon. Although this trip was a city break in Europe, which we all know can be super pricey, days spent exploring won’t leave you out of pocket. The old town really is full of amazing sights and sounds such as the music of the buskers in the streets, allowing you to get a real taste of Lisbon and taking in the views whilst being serenaded. 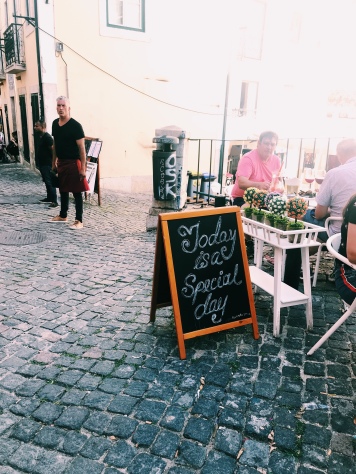 Okay so I know this festival only happens once a year… but if you’re planning on going to a European festival AND a city break, you can just combine them both into one trip! My sisters bought me my NOS Alive tickets for my 21st birthday and it was such a ball. NOS Alive always have a pretty good lineup anyway, but this year I got to see Arctic Monkeys, Snow Patrol, Two Door Cinema Club and so many more amazing headliners. I was probably most excited for the Kooks BUT THEY CANCELLED LAST MINUTE. Nevertheless, it was still an amazing experience filled with music, sangria and… well… more sangria. If you ever have the chance you should go!

Aside from Lisbon being an amazing city, it’s an amazing city surrounded by beaches. What more could you want? Now, speaking of NOS Alive, the festival is pretty much on the beach in Alges. Before the festival, we stocked up on sangria from the supermarket and sat on the beach for hours before heading in. So we got to sit on the beach all day drinking AND save money at the festival because we were already drunk. Win win situation? I think so. Although it was convenient, Alges is a tiiiiny beach. So when we decided to go for a full day at the beach, we hopped on the train line from Cais de Sodre to Cascais where there are several beach stops along the way. We decided to visit Carcavelos, as this is the biggest beach and not too far (about 15-20 minutes on the train). I may have experienced severe sunburn, but it was so lovely to have a peaceful day at the beach and go for a dip before heading back into the hustle and bustle of Lisbon.

I know what you’re thinking, wow Lydia hasn’t mentioned food ONCE yet on this post! Be patient, it’s coming. Time Out Market is located just opposite Cais de Sodre station and is food galore. It’s basically like Baltic Market… but in Lisbon… and maybe a bit cooler. There are tons of stalls all serving different food such as sea food, Asian food, American food, you name it. There was even a stall selling JUST croquettes which was a dream come true for me. SO. MANY. FLAVOURS. Anyway, you order the food, get handed a buzzer, and when it’s finished the buzzer will go off. Once you’ve collected all of your food, you’ll probably have a mismatched concoction in front of you with foods from all over the world… and that’s great. Frankie, Sally and I combined had: NINE croquettes, some amazing triple cooked garlic fries with peri peri sauce, scallops, the “best steak in town” in a super creamy sauce and several vegetable chow meins. They also sell lots of wine, which we went back to drink the next night.

Possibly the strangest but also possibly my favourite moment of Lisbon was visiting Chaptio a Mesa. Frankie and Sally had just arrived at about 9:30pm and we decided to have a wander to try and find some food. As we were staying in the old town, a lot of the places were closed and we weren’t having a lot of luck. After walking for a while, we were about to turn back when a man tried to usher into a gift shop. We were all a little confused, until he said there was a restaurant and bar behind it, so we walked through the gift shop and stumbled upon the most beautiful lit-up garden with a view over the whole of Lisbon. Where the hell were we? We then continued down some stairs to a cute little restaurant covered in fairy lights, where we ordered some food (they sold the best crispy chips ever with aioli and this amazing tomato dip) and a huge jug of sangria. We couldn’t help but notice whilst we were eating that people kept going down the stairs below the restaurant and we heard there was a DJ on so we decided to check it out! We wandered down into a basement full of people and there was a DJ playing, but not the type of DJ you and I may know. He was playing the most amazing Portuguese music and everyone around us was latino dancing. Did I mention the basement was also surrounded by trippy artwork? Yeah that too. We stayed and danced for a little while but decided our moves weren’t up to scratch in comparison to the locals so we left, but it was such a cool place to go and I wish we’d have gone back! 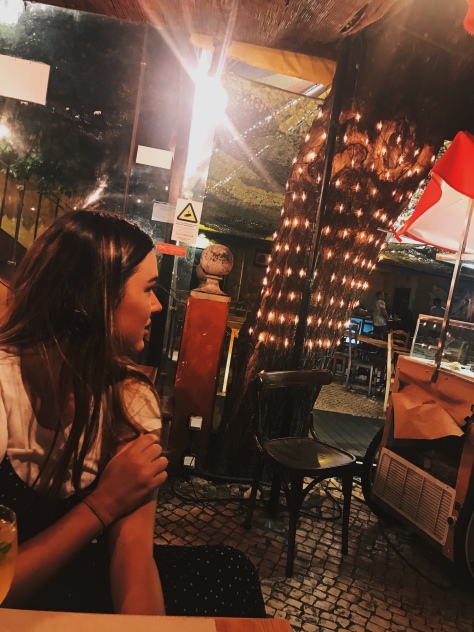 Continuing with the theme of food, we decided to wander into the heart of Lisbon and see what it had to offer. We came across a little square that was hidden amongst the main street and decided to take a look. There were a few restaurants but one was offering brunch and as brunch is the best meal of the day that’s where we went! It was called Aprazivel and the menu offered what was essentially a personal brunch… buffet? Let me explain. So they offered 3 different variations of brunch. “Light” which consisted of yoghurt with fruit and granola, a brioche roll, fresh cheese, ham, scrambled eggs and a choice of a hot drink. “Supreme” which came with pancakes with fruit and syrup, a brioche roll, various cheeses, ham, orange juice and a choice of a hot drink. Finally, “Benedict”, you guessed it, was eggs Benedict with smoked salmon, brioche rolls, cheeses, ham, orange juice and a hot drink. Now you might think that would cost a bomb, having about 5 courses just for brunch in the centre of a city but nope, it was actually really cheap. Aaaand the food was amazing. So if you’re looking for a brunch spot, look no further.

Located in Alfama, Copenhagen coffee house is most probably the coolest coffee spot I’ve ever been to. Lucky for us, our Airbnb was located literally next door. Upon seeing the tiny doorway, you’re led to assume that there’s nothing much there, but the place is huge and bustling! Maybe it’s a common theme in Lisbon, as they also offer a breakfast plate for 10 euros which comes with overnight oats, fruit and granola, a soft boiled egg, bread for dipping, butter, jam and a choice of pastry with a glass of juice. However, I settled with a ham and cheese toastie and a cinnamon roll. It was still really good. Not only is there a cafe located in the Lab, but they also bake fresh bread everyday as well as brewing their own coffee. We also discovered later in the week when we were drunk and stumbling back to our Airbnb, that they also bake bread throughout the night too. We might’ve asked for some but I don’t remember much after that. Anywaaay it’s a great place to go for a morning chill before going out and exploring Alfama. 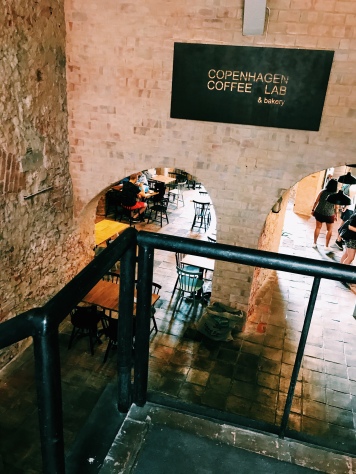 We ended up returning to this square a few times whilst in Lisbon. To be honest, it’s pretty hard not to as it seems to be at the centre of everything. Overlooking the sea, it’s a lively place where you can eat, drink, and chill to your hearts desire. There are loads of restaurants and bars surrounding the square, but check the prices before you sit down. We managed to find some pretty cheap places, such as Ministerium Cantina, where I got 8 croquettes to myself (yes, I know I have a problem) and didn’t lose sleep over it. We also drank in a place called Can the Can, where everything and I mean everything is served in sardine tins… except for the cocktails thank god, which just happened to be FIVE EUROS. I mean that’s a pretty rare find in Lisbon. A jug of sangria is never a bad investment either, as it’s around 15-20 euros and that can make 4-5 drinks! Just a short walk away from the square, towards Cais de Sodre station (behind it) there’s a gelato place called Fiori and I want to live there. Not only was the gelato tasty but the interior was so cute! They also sold black ice-cream and I was gonna do it for the gram but it was coconut flavour so I gave it a miss. All in all though, the square seems to be the life of the party so if you’re ever stuck on where to go, I’d say go there.

The most famous place for a tipple in Lisbon is Pink Street, and the floor really is pink, the whole street! We visited pink street after timeout as it’s just around the corner, and there’s quite a selection of bars to choose from. To put it bluntly, we started in a classy cocktail bar and we ended up in a renovated brothel, but it was an experience! At the end of the night, locals come and sell drunk people samosas and sandwiches out of buckets aaand as dodgy as that sounds now that I’m reading it back, it was a pretty good idea at the time. The next time we went out, we decided to google some rooftop bars but all of them seemed pretty pretentious, until we came across Lost In. Lost in is a rooftop bar with a twist, with cheap cocktails (yaaas) and couches outside, decorated with umbrellas, green lights and statues. It may sound strange but it was actually really cool and they also give you blankets to sit outside and snuggle in which is super cute. I’m not entirely sure where we were, but we found loads of nightlife in that area so if you’re heading out for the night, head in that direction! 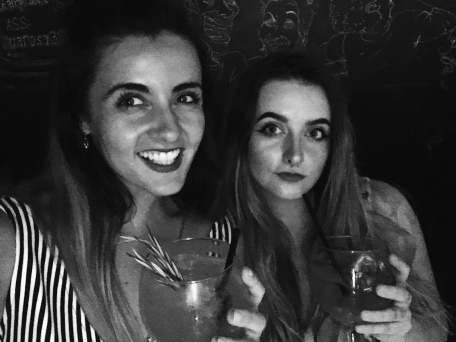 Last, but certainly not least, Castelo de S. Jorge. The castle is located at the very peak of the old town, meaning it has the best views of anywhere in Lisbon. It’s about 8 euros to get in, but the castle and it’s surrounding gardens are just beautiful. Not only are the views incredible, but there are little seats carved into the castle walls so you can sit and admire every inch of Lisbon. They also sell wine up there, as any excuse to get drunk is a good one. I can’t quite put it into words how lovely it is up there, so I’ll let the pictures do it justice.

Lisbon was more beautiful and amazing than I could have ever imagined and if you ever get the chance, I hope this post has persuaded you to go and check out some new places in another corner of the world.