Cheese fest. Yep, you read that right. A festival. FOR CHEESE. When I first heard about cheese fest I assumed it would be in America, but when I found out it was coming to Liverpool, my heart kinda skipped a beat. What is Cheese Fest, you ask? Basically, independent businesses that are cheese-based all gather to sell their cheesy goodness all in one place. Dreamy.

The Liverpool Cheese Fest was thrown on the Saturday and Sunday just gone (3rd & 4th Feb) in the guild of students, but they’re still touring the UK and having a festival each weekend in different cities. So if you live in Edinburgh, Exeter, Wolverhampton, Bournemouth or Leicester, or fancy traveling to any of these places in the weeks to come, you can still get your cheese fix.

Cheese Fest brings to life all of those foodie videos you’ve seen on Facebook of major cheese pulls and melts. My boyfriend and I went together, and although I would’ve spent my live savings there if I’d had the chance, we decided to share everything we bought. Why? To save room for more cheese, obvs.

As we walked in, the first thing I saw was a stall called “Knights of the Round Cheese”, selling the one thing I’ve wanted to try for so long. Have you ever seen that video of the massive bowl made out of cheese and the hot pasta is swirled around it to create a cheesy pasta miracle? If not, watch it. If you have, it probably made you drool. ANYWAY, that’s what they were selling. They used linguine pasta which is my fave and it was as cheesy as I thought it would be, it was also topped with pancetta and pomegranate seeds (I know, weird, but oddly nice).

After obliterating the pasta, we then tried some halloumi fries. They weren’t super deep fried, just lightly. Light fried? Is that a thing? They were topped with spring onions, sour cream, sweet chilli sauce and pomegranate seeds… again… I don’t get the obsession with the pomegranate seeds but they’re a nice touch. They were amaaazing and greasy and everything you’d want from halloumi fries, but so so sickly. Amazingly sickly.

There was also a raclette stall, called the “Raclette Brothers”. Raclette is a swiss dish of melted cheese and the cheese is basically heated up until the top layer is melted, then scraped onto the food. We had herby potatoes, parma ham and red onions, coated in hot melted cheese and topped with paprika. Oh yeeaaah. 10/10 would eat again.

By this point we were pretty full, but there were so many more stalls to choose from! There was a stall called the Mac Shac, selling all sorts of mac ‘n’ cheese with all sorts of toppings. Parmstar, who were selling tater tots covered in nacho sauce and chicken burgers covered in bechamel sauce. There was also a grilled cheese stall and a company called “bake my brie”. Basically all of the cheese you could dream of in one room.

There were also cheesy desserts, for those with a bit of a sweet tooth. There was a dutch pancake stall, selling cheese flavored mini pancakes and waffles (not really my thing, but whatever gets your taste buds going) and a cheesecake stall, selling different assortments of delicious cheesecake, including white chocolate & raspberry (my weakness). Unforunately, we’d had enough cheese for the day (I never thought I would ever say that). We spotted a rolled Thai ice cream stall called “The Original Scrapes” and decided that would be the cherry on top of our food coma. I’d never tried rolled ice cream before but always wanted to, so I was super excited! They had all sorts of flavors, from cookies to kinder beuno, but I opted for white chocolate buttons and Conor got an Oreo one. THEY WERE SOOOO GOOD, and really entertaining to watch being made too. Probably the best ice cream I’ve ever tried. I’m not sure if it’s still there, but I’m pretty sure they sell rolled ice cream in the Baltic Market if you fancy giving it a try!

I may have left with the biggest food baby ever and a wave of indigestion that lasted approximately 5 hours, but I still think Cheese Fest should be an annual thing… or weekly. I do hope it returns next year though, as it seemed to be a huge success and left a lot of people with cheesy grins. Literally. 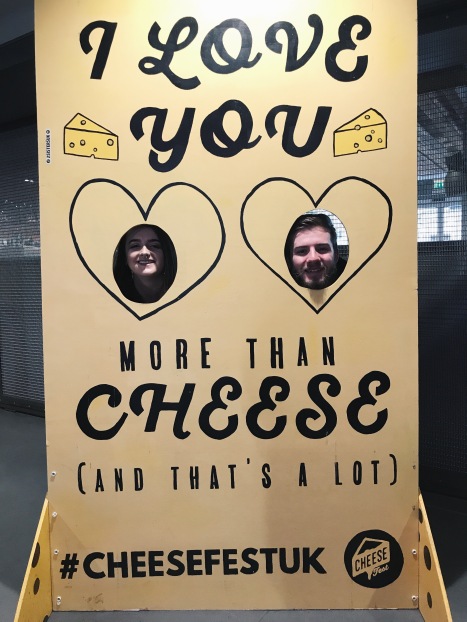 If anyone does fancy attending the UK’s biggest touring Cheese Festival, you can buy tickets here: https://www.eventbrite.co.uk/o/cheese-fest-uk-13849419029